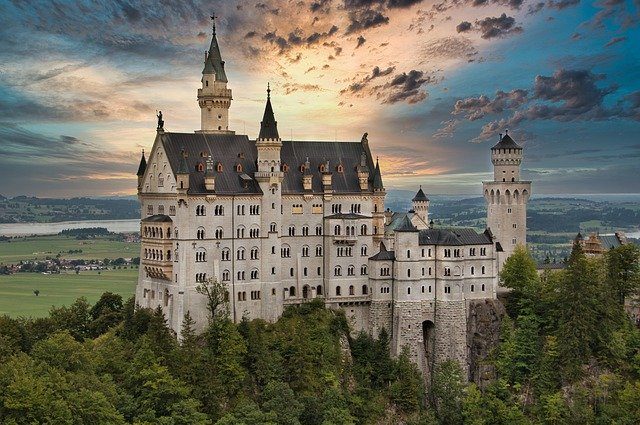 Neuschwanstein Castle – why you should have seen it

Germany is huge and has a varied history. There is nature, museums, castles, old buildings, modern buildings, Oktoberfest, good football teams – enough of everything. But among all the sights the country has to offer, Neuschwanstein Castle is considered one of the world’s most famous and one of the most popular destinations of all. Why is that? What explains the legendary reputation of this one place of all places?

In Füssen, a small town in Bavaria, there is beautiful nature. The first elevations of the Alps begin right there. The first mountains with abundant green forests can be found. Füssen itself has been considered a health resort for centuries. Kings and other nobility from Bavaria have always been particularly fond of recuperating there.

The beauty of the surroundings was probably the reason why the legendary King Ludwig II of Bavaria had a magnificent castle built there. It is said that Ludwig was very eccentric and had a certain penchant for extravagance. In addition, he probably had a romantic soul. This is the only way to explain why he used the state treasury to build himself a huge castle in Füssen, which is purely for its visual appeal. For from a military point of view, a fortress at this location is completely useless.

In other words, Neuschwanstein Castle is not a “real” knight’s castle from the Middle Ages. In reality, it is just a building erected in the style of the Middle Ages. Apparently Ludwig was able to live out all his fantasies there and turned a kind of fairy tale into reality. From the inside, the picture is the same. If you take the Neuschwanstein Castle Tour, you won’t see any medieval, dark vaults. Instead, there is pure pomp and luxury. Stucco and murals everywhere – it’s also like a fairytale.

All in all, the whole puzzle then falls into place. There was an unusual king who was supposedly homosexual at a time when that was unacceptable. It was speculated that he was mentally ill and even incapacitated him. Four days later, the 1.90 m tall man drowned in his clothes in 80 cm deep water. That’s how legends are formed, and that makes people curious.

In addition, it seems as if Neuschwanstein was only built by him to attract masses of tourists from overseas 100 or 150 years later and to make the region rich. It is almost unbelievable how many visitors there are on a regular basis. You just can’t help it. The architecture is unique, and inside it also looks like something out of a Disney film.

So yes, it is true. Neuschwanstein Castle is one of the most spectacular places Germany has to offer. And indeed, you should have seen it once. In any case, we can only recommend it.